Skip to Main Content
It looks like you're using Internet Explorer 11 or older. This website works best with modern browsers such as the latest versions of Chrome, Firefox, Safari, and Edge. If you continue with this browser, you may see unexpected results.

Turnitin: Definition and Application: Get started

This guide gives you an overview of Turnitin: What is it? How does it work? and How to use with Canvas?

Turnitin is a plagiarism detector that identifies the similarity between students’ assignments and other writings or published work.

All written assignments submitted online at VinUni are submitted to Turnitin. This tool enables faculty to check the similarity of student’s work to other sources in order to avoid plagiarism.

Using plagiarism detector such as Turnitin, the University would like to promote Academic Integrity and to maintain a standard of honesty, fairness, responsibility, respect and courage of all students. 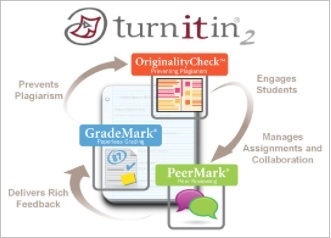 Turnitin can identify the language in which a paper was written and then translate it into English. The resulting English paper will be checked with all the available databases. If any match is found, this will be displayed.

Translate Matching currently supports the popular languages, such as:

Turnitin is a plagiarism detection service used to educate student regarding appropriate citation and referencing techniques.

There are some main uses of Turnitin:

- To check for and prevent plagiarism.

- To identify possible occurrences of plagiarism and help to improve the academic writing.

- To provide a report that can help identify plagiarism.

What is the accepted file type/size for Turnitin?

Please follow the file type/size requirements below for a successful submission in Turnitin:

-  Only One document can be submitted, multifile are not accepted.

How does Turnitin works?

Once students submit their work, Turnitin will make a comparison between the submission and other sources including Internet document, Internet data, previously submitted assignment repository, journal registry, and publications.

Then, Turnitin will create:

- A “Similarity index”, which indicates the percentage of matching between submitted paper and other sources.

- An “Originality report”, which demonstrates all these matches in detail, including the sources found.

Both students and lecturers can view these submitted work with its Index and Report.

Sources of the similarity Report

Turnitin checks a paper against its’ various database to find a match. These sources include:

- The repository of papers that VinUniverity students have submitted,

- The repository of papers of VinUniversity staff and faculty,

- Billions of both current and archived articles from the Internet,

- Thousands of Periodicals, journals, and publications.